I had never heard of a chain of thrift stores called “Thrift Town” but it was the weekend and I was looking for something new and exciting to do and was in the mood for some good junking and treasuring hunting so I plugged in some basic criteria into Google and bingo – the Fort Worth, Texas, Thrift Town appeared. 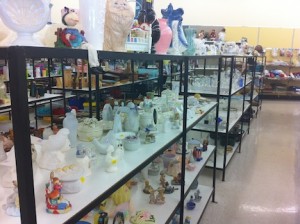 Thrift Town touts themselves as the “First-Class Second Hand Store” and the sheer size of the location sounded amazing so I plunked in the address into my car’s navigation system and nearly 4 miles later was at Thrift Town (had no idea it was so close to me). The parking lot was packed! I had to drive around for a while till I could get a parking spot. 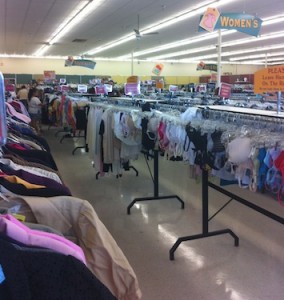 Walking in through the front doors I immediately notice that it is super bright in here. And being so bright means you can really get a look at things and then my eyes are drawn down to the floor and OMG! – Crickets! Living in the Texas we have some AMAZINGLY huge crickets (you can put a saddle on them and ride them) and I hate these critters and there were several of them right in the doorway.  I mustered up my courage and forged ahead. 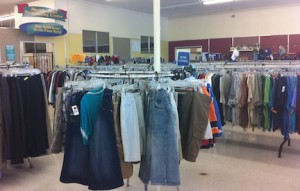 OK – sections of the store are well indicated via signs over head so you know right away where things are. The store is really huge and immediately I see clothing is what Thrift Town specializes in as that is what there is most of….racks upon racks of clothing. The housewares section was sorely lacking in merchandise and I was utterly disappointed and was kinda surprised at how pricey the stuff was. The furniture section however looked ok, as there seemed to be some decent looking items in fairly good condition. Accessories section was not impressive either and things were also pricey. There was another giant area of the store for children’s items that I did not go through but it was huge so who knows if it would be worth the browsing. I decided to look through some of the clothing and lost interest pretty quickly as most of it was OLD, FADED, and Expensive! I feel that prices of $7.99 – $9.99 for a basic no brand named top that is already shrunk, faded and old is too expensive when I can go to Ross or TJ Maxx or Marshalls and get something brand new for that price.  Customers were lined up at the registers so apparently I was one of the few that were not impressed with what Thrift Town offered as I left empty handed and deciding to most likely not return. 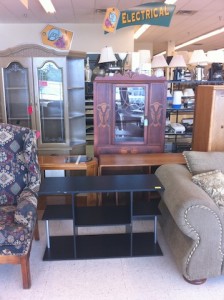