You are here: Home / Vintage Christmas Collecting Series / What You Need To Know About Collecting Headvases 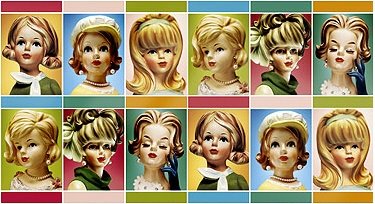 But Japan wasn’t the only country to produce such items; America made its share as well. Stateside companies such as Betty Lou Nichols Ceramics, Ceramic Arts Studio, Florence Ceramics, Josef Originals, Roseville, Royal Copley, Royal Haeger, Shawnee Pottery, Stanford Pottery, and Weller were prolific producers. But as U.S. labor costs increased in the 50s, so did competition, making the production of such novelty items less and less profitable. Copyright, especially abroad, was not enforced; in many cases, firms would mimic each other’s designs, with only a change in paint color, size, or other subtle detail to differentiate the manufacturers’ products. For these reasons, the majority of U.S.-made head vases found today were produced prior to 1950, while Japanese imports continued strongly into the 60s.

Head vases were made in a variety of designs. But it was the elegant, fashion-model look that quickly became among the most popular. Flourishes such as faux-pearl necklaces and earrings, hair bows, eyelashes, and applied textiles became the norm. Glamorous movie stars and beautifully coiffed fashion models inspired many of the designs both here and abroad. One novel approach, which quickly became commonplace, was the addition of a well-manicured hand. Positioned so as to be stroking the face, this gave a touch of feminine elegance to the piece. Another common embellishment was the attachment of separate items to the planters. Examples include buckets hung with string around a laborer’s neck or a textile or ceramic parasol held by a sweet little girl.

The market for such ceramic pieces peaked in the mid-60s. By this time, designs had become simpler, often smaller, in order to reduce costs and increase profitability. Whereas many early head vases topped 8″ in height, newer ones were often only 3-4″ tall.

Today, head vases of all types have become very collectible. Those which originally sold for only a couple dollars each now command many times that. Pieces depicting well-known personalities, such as the popular Jacqueline Kennedy by Inarco or the Disney character series by Enesco, are often most highly prized. While many head vases can be identified by their hallmarks (which may be part of the mould itself, painted directly onto the item, or applied as a sticker), others have no identifying marks whatsoever. Often only the style of the subject’s hair or clothing attest to the item’s age, if not its manufacturer. Because they could not predict today’s collectibility of ceramic head vases, manufacturers typically did not save their records; most historical documentation therefore has been lost forever.

Brinn’s China-Glassware Co.
Founded by Samuel I. Brinn in the early 50’s, the Pittsburgh-based company stayed under the management of the Brinn family. In its beginnings, Brinn’s was a wholesaler of art ware, dinnerware, figures, garden pottery, jardinières, premiums, teapots, glassware, ovenware, novelties and various ceramic and glass accessories. By 1959, the company distributed ceramic and brass imports from Japan and England. Two decades later, under the operation of president Charles Brinn and vice president David M. Brinn, the company was listed as ian importer of ceramic figurines, animals, novelties, dinnerware, stainless steel, and dolls.

Enesco Corporation
One of the largest head vase manufacturers in the world, Enesco was founded in 1959 by Eugene Freedman. Originally operating a small plastics and figurine company in Milwaukee, Freedman soon joined a Chicago-based import company, which had spun off of a prominent wholesale merchandising operation, N. Shure Co., the name of which morphed into N.S. Co.—and ultimately, Enesco. The company began by marketing Southeast Asian giftware out of its modest Elk Grove, IL facilities; by the 80s, Enesco had expanded its presence throughout the U.S., and into Canada, Puerto Rico, Hong Kong, and Europe. Most designs of Enesco head vases were made by Japanese pottery makers and are marked exclusively with paper labels. Continue Reading.