You are here: Home / Vintage Christmas Collecting Series / Do You Collect Josef Originals? 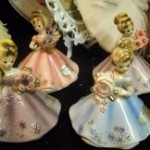 It was about a year ago that I first came across a little 6-year-old birthday girl angel figurine. I was out product sourcing when I found this little figurine. I noticed that when I turned the figurine upside down she had “Josef Originals” incised. I had no idea at this point what a Josef Originals was but was glad the figurine was marked as items that are marked or signed tend to sell faster and for higher prices then un-marked or un-signed items and the price tag on this little figurine was well within my budget.

I got the little figurine home and opened up my MAC to begin a bit of research on “Josef Originals” and sold her that evening! Well, it turned out that buying this little figurine was indeed a good investment as she sold right away for more than 4 times what I snapped her up for. I now know that there are many collectors of Josef figurines and the Birthday Angles are just one of many series of figurines that were created by the company. Since I had not known about Josef Originals until last year, there are perhaps others that don’t as well so I thought the below might be helpful as the world of Josef Originals is a highly-sought after market.

Josef Originals are designed by artist Muriel Joseph George who is the creator of Josef Orignals back in 1945. These figures are created with the utmost attention to authenticity, including the detailed ceramic construction and 24K gold paint for character accents. Cute animals, charming dolls, delightful Christmas characters.

What were some of the more popular lines created by Muriel for Josef Originals?
* Dolls of the Month Series–A doll for every month of the year.
* Days of the Week Series–Dolls for every day of the week.
* Little Pet Series–Children with pets.
* Birthday Girls Series–Dolls for every year from newborn to 21.
* Birthstone Dolls Series–Girls with dresses the same color as birthstones.
* Career Series–Showing careers such as teachers and nurses.
* All sorts of Christmas figurines.

The name
Yes, there is a story behind the name “Josef Originals.” The name was supposed to be spelled “Joseph,” but the printer made a mistake on the first set of labels that were ordered. It was too late to change the labels. The orders were in and the ceramics had to be shipped. So, “Josef Originals” was born. Read More.